Early days
In April 1925 local landowner and theatre buff John Kingston gave Kings Langley Village its first taste of theatre,  directing a few friends in two modest one-act plays (The Bishops Candlesticks and Storm in a Teacup- typical fare of the period) at the then village hall (the still standing old Church House) and thus founded the Kings Langley Players. In those early days there was no formal membership. Kingston summoned his chosen actors to take part in the plays he had selected. In pursuit of excellence he was ruthless – unceremoniously dropping a leading lady if she dropped her crystal diction; telling his male juveniles (quite rudely) that they must do something about their developing double chins! 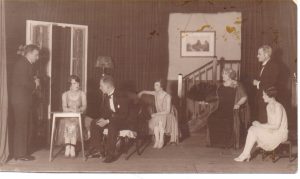 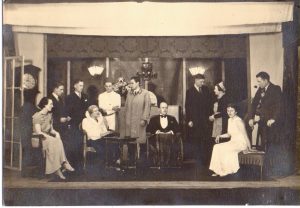 War time manoeuvres
Not even the Second World War could close down Kingston’s company or halt its indefatigable progress.  Between 1939 and 1945 two or three plays were staged each winter at Church House and then toured around service camps and auxiliary fire stations.  Kingston drew his casts from the fire service, the Observer Corps and even front line troops home on leave! One civilian pilot flying the Berlin Airlift of 1948, would be landing at Templehof airfield one day and striding onto the Kings Langley stage the very next evening as the romantic male lead.

Moving on and growing up
In 1950 Kingston led his troops to their new home, the spacious, newly-built Kings Langley Community Centre (with a sizeable and permanent stage plus up-to-date technical facilities). Cannily, the old autocrat recognised that ex-service men and women on their return to civvy-street would not take kindly to blind obedience to one man’s rule.  He graciously deferred to democracy.  KLP rank and file members now ran the society through a modern board of management. Scripts ceased to be vetted by the vicar, freeing up the Players to tackle ground-breaking subjects, give bolder presentations, even allowing (a controversial first for amateur theatre at the time) a nude actress to appear on stage (making headlines in the Daily Express)!

Raising the bar
Post-war audiences for professional and amateur theatre rapidly became very sophisticated, no moreBishops Candlesticks for them, they wanted to see West End plays done locally to West End standards. This placed heavy demands on backstage resources, prompting the Players to replace our rickety old costume and scenery store. Over the next few years there was a huge effort to raise the cash needed for this ambitious project.  Then the real work began – getting down and dirty to do the actual building. Over the summers of 1979 and 1980 the Players became navvies: mixing mortar and cement, heaving bricks and generally doing all the backbreaking labour that raises a building from the earth. Our splendid brick Studio now houses scenery, fixtures, furniture, lighting and sound gear, props , a huge collection of costumes and the workshop where we build every set – all the accoutrements needed to  stage regular productions to  ever more professional standards.