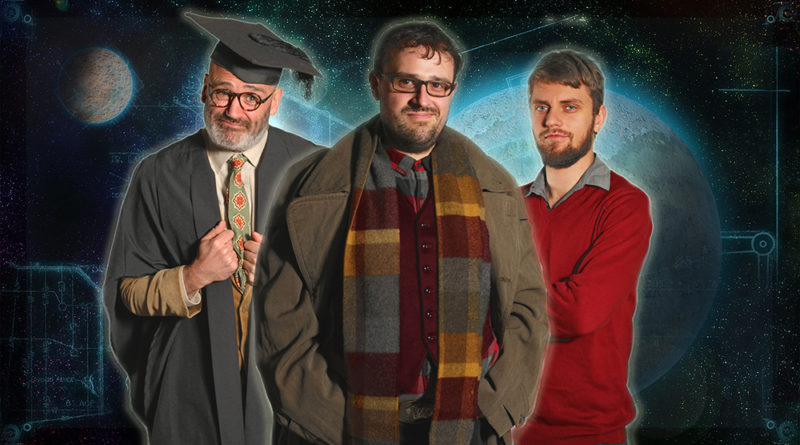 After the Hitchhiker’s Guide to the Galaxy, the irrepressible Douglas Adams went on to create Dirk Gently, a private detective whose investigations are driven by his unshakeable belief in the fundamental interconnectedness of all things. In this adventure he is on the track of a gruesome murderer – and a missing cat. This is all tangled up with the mysterious studies of the Cambridge Professor of Chronology, the works of the romantic poet Samuel Taylor Coleridge – and quantum physics. What starts with a single, but undeniably nasty, murder morphs into a case of stupendous complexity with no less at stake than the survival of life on earth.

“It’s two and a half hours of blissful mayhem and escapism” says Sally-Anne Rafferty who’s directing for the Players, “with a dollop of absurdism for good measure. My job is to do the knitting! That is to say – knit all the elements together: acting, dancing (there is a big production number – this is not your average murder mystery or sci-fi adventure) and audio-visual special effects. But it’s a delight to bring to life the gloriously mad world of Dirk Gently, originated by Douglas Adams and to which he and his intrepid co-writers Arvind Ethan David and James Goss gave a remarkable new lease of life in this very entertaining stage play.”

Sally-Anne helms a top-notch KLP cast with great comedy credentials led by Sean Lovell (a Noda award winning actor) as the interconnected Dirk. In strong support are Jon Musker as Reg, a prodigiously kindly and rather odd professor; Jamie Yates (fresh from taking the lead in KLP’s spring production Who is Theo?) as Dirk’s permanently bewildered roommate from their college days; John Bradnum (who made a starry debut as a director with Who Is Theo?) as a technocrat and victim of crime; and the perpetually amusing Gary Edgar as a ploddish policeman also on the track of the murderer.

Adds Sally-Anne enthusiastically, “this show is an unmissable treat for all Douglas Adams fans; for all sci-fi fans (as we have time travel and aliens); for all theatre fans (as we have funny actors being seriously funny); for all Samuel Taylor Coleridge fans (we feature his best quotes); and for all cat fans (as a particular feline is pivotal to the plot). You’d be mad to miss it!”